None may deny the hunger of the common people for a peaceful and prosperous life. A life free from rulers and tyrants, from taxes and tolls, from duties undesired and burdens unwanted. 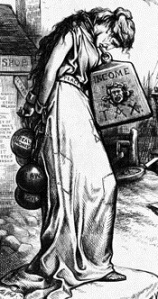 It is in the nature of human beings that they gather in groups for their mutual benefit. Regulating these groups to minimise conflict and promote cooperation has been humanity’s great and ongoing challenge. We have slowly developed better forms of governance, advancing from the divine right of kings to the limited right of the majority. But conflict and corruption remain the order of the day, even in the best democracies.

The libertarian philosophy of individual rather than group rights, of respect for life, liberty and property, of consent and non-aggression, represents a huge step forward on the human path to civilisation. This is not a new philosophy, tracing its roots to ancient Greece and early China. Many of the basic ideas were developed 300 years ago in the age of enlightenment by visionaries such as Adam Smith and Thomas Jefferson. Most of the American founding fathers would be described as libertarians today. Although few in number, the influence of libertarian thought has been profound.

More and more individual citizens are demanding a departure from the limited and divisive nature of modern representative democracy, which elevates powerful groups at the expense of the interests and rights of  individuals.

As the Internet and modern technology allows every man and woman to express their individual preferences and choice of lifestyle, so will modern libertarianism allow every man and woman to own and control their own lives. Currently most people cannot see or comprehend an alternative to the winner-takes-all brand of democracy by which they are ruled. It is the mission of libertarians worldwide to make the ideas of individual liberty and consent as widely known as the ideas of democracy.  It is to this mission that The Libertarian Society of South Africa is committed.

The Libertarian Society was established in 1986 by  Charl Heydenrych, Peter Kidson and Trevor Watkins, following the First Spring seminar organised by Frances Kendall the year before.

The Libertarian Society is a loose collection of individuals sharing a common philosophical view, as described by the Consent Axiom. They have organised a Spring Seminar every year since the first one at the Nebo Farm in 1985. They hold a regular monthly social get-together in several South African cities. They have maintained an active online discussion forum for many years.

If you would like to find out more about Libertarianism, then please read through the articles on this blog, and visit the websites listed on our blogroll.

You can also add your own comments or questions to any of the articles, subject to moderation. If you would like to receive an email whenever there is a new article or comment,then subscribe to this blog. If you would like to contribute articles to the blog, then please register on this site (See Meta box at very bottom of every page), also subject to moderation and approval.